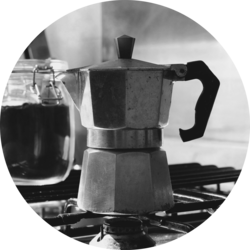 It’s very hard for me to talk about this, and not just because it is forbidden.

I can clearly recollect without flinching each of the bombs, the mountains of cadavers, the wonderful hanging gardens, the slave market, even the twenty-five lashes I received once for stealing a phone, and yet, if I try to give a name to any of those figures in these events, my heart collapses and I cannot proceed. It might appear strange, but many survived until now thanks only to the illusion that nothing of it mattered, and no single person involved in it mattered. Perhaps this is the infamous shame of not feeling sufficient pain, about which you can surely find some brilliant essays in your local flesh-library.

This will not be about that. In fact, I will force myself to talk about a single one of those unremarkable people, with the desperate hope that it will stand for the millions of them. On an unremarkable hill beside a forgotten bend of the river, there now lies a factory. But quite some time back, in ’43, there was a house there. On this unremarkable hill beside a forgotten bend of the river, an AutoDrive car gently halted in the point on the dirt road closest to a small cottage. Out of it popped a tall, young woman in a perhaps too short lemon sundress. She heaved a large sport backpack out of the self-driving, two-headed vehicle, then turned back to help her parents out.

“Thank you, darling” whispered Mary through a smile as she gracefully pulled herself up on Sophie’s hand. The father was not going to submit that easily. Sophie stuck her head through the door to find him anchored to the seat in resentful indecisiveness. “Dad, please. You promised.”

Behind round glasses his face shrivelled, in all likelihood from the realisation that he very much regretted that promise. He was nevertheless about to manage to spontaneously will himself out of the car when his wife cut matters short.

“Sebastian, get out of the damn car.” ordered and pleaded Mary, striking an unstable balance between stern and loving. And Sebastian did, but he was not chuffed about it. As soon as he stepped onto the meadow, the symmetrical car modestly departed in the direction it came from, leaving the family of three alone with the small country house and a delicate summer breeze. An overcast summer sky almost imperceptibly rumbled.

The door was most fascinating to Sophie. It was certainly pre-war, and in all probability older than her, possibly even than the inhabitant of the house themselves. It sported two remarkable features, which she had never witnessed on an actual house in her life. The first was a small hole of glass in the middle of the door, at eye level, protected by a brass ring. This peephole allowed residents to observe people in front of the door in safety without actually opening it. The second interesting object was an actual, analogue, acoustic doorbell. Sebastian, on the other hand, seemed less charmed by the vintage contraptions and pressed his finger squarely on the button, to which a loud buzz followed. “Oh” mouthed Sophie in moderate amusement.

The man who came to open the door was considerably less amused about having to do so, and his expression quickly turned sour as he realised who he had opened it for. Sebastian tried: “Wallace, we…” but was instantly interrupted.

“First of all…” grumbled the man at the door. Sophie noticed that the man’s frown was curiously similar in structure to her father’s, yet somehow carried a distinct, but certainly related, negative emotion. He surely possessed the eyebrows necessary for an absolutely respectable frown of heartfelt contempt.

“No, wait.” the man continued, in a hoarse, deep voice. “I have only two things… two things to say to you.”

The family of three paused.

“One: fuck you, Sebastian. Fuck you dearly. Two: go away.”

Then he turned to Sophie’s mother. “‘Twas lovely seeing you again, Mary.” Then he turned towards Sophie herself, seemed to ponder a bit whether to add anything else for her too, but apparently gave up on it and slammed the door shut.

“Wallace, you fucking weirdo.” Sebastian knocked (another first for Sophie). “Open the door!”

“I can’t believe I forgot” he said. He was holding closed a dressing gown right below a full, unruly grizzling beard. Which then terminated into the aforementioned frown. “I forgot about a third thing. Number Three: that is not my name. Never call me that again.”

This vaguely seemed to have some effect, as Wallace ever so slightly relaxed his expression from contempt to attention. Mary sighed in temporary relief. “This is Sophie, our daughter.”

No visible reaction leaked from Wallace. He ruminated for a while. Then, he stretched an open arm towards the object of his rumination. Tiny, graceful, pale hand locked with dark, hairy, strong hand. “I’m very pleased to meet you, Sophie.”

“Uh… the pleasure’s all mine.”

It seemed like this general display of pleasantness was sufficient to calm Wallace to the point where he could turn his sight towards Sebastian without necessarily having to start flinging insults. Speaking of Sebastian, he was fuming, but kept silent. The two brothers just stared at eachother, each stuck expecting the other to move first so as to be then able to quickly take hold of the role of the sharp-tongue cynic. It was then that Sophie noticed the prosthetic arm. Wallace’s left arm was entirely mechanical and exquisitely retro in that; while not as antiquated as the door of the house, it was certainly an outdated model.

Mary yet again took it into her own hands to break the loop in which the two men were bogged down. “Sophie’s getting married. So, we thought we could pay you a visit and let you meet her.”

It wasn’t just old, it was also very… rustic. The roboticist was certainly more focused on function than form. Stainless steel chassis with decades old scratches and dirt, chunky (but probably tough) servos, four padded fingertips. Not actually designed to feature four, the pinkie was missing. With the fist currently clinched in bitter remorse, a bit of noise. A slight whirr and a clink now and then. Not terrible, but way noisier than the cheapest you could get for free now from the national health service. Still, one radical metal arm.

Wallace’s robotic index finger tickled his moustache as he marinated this fact in his biological brain. “Well… congratulations.”

The family of now four was reunited, at least topographically, in Wallace’s diminutive kitchen. Awash with fake-incandescent LED light, Sophie’s newly acquired uncle fumbled with a Moka, entrusting precision subtasks to his metal arm and the less demanding ones to his flesh appendage. Now, if you have the power of presumed innocence stemming from being the youngest person in the room, why let it go to waste? On the ground of this consideration, Sophie blurted: “so, what’s with the arm? What happened?”

“Sophie!” reprimanded Mary, this time mostly stern and with just a sprinkle of love. Wallace turned on the stove, and moved the Moka on the flame maintaining its attitude perfectly orthogonal to sea level.

“Don’t even think about it” said Sebastian. “He is not going to tell you.”

Wallace didn’t answer and kept facing away from the others.

“No offence taken. It’s just like your dad said: I’m not going to tell you. But I don’t blame you for asking.” He changed the subject: “do you study, Sophie?”

“I’m studying for a degree. Dad told me you have one in mathematics. I…”

“Oh, so you have told her of me!” he murmured spitefully.

“He did…” returned Sophie. “…a bit. I looked around for you on the internet but it’s like you’re just not there. I even added you on Facebook, but you never replied.”

Wallace couldn’t help smiling, nodded a bit, and corrected: “love, that facebook instagram profile bullshit is fake. The Murries made it for me. So much for all the taxes I pay…”. As he said this, Sophie caught him involuntarily clinch on his left arm for a millionth of a second. He propped himself up, to then stare back down in thought, perhaps reminiscence. “You cannot find me on the Internet, and for a few, but good reasons. They will acknowledge I exist. But nothing more.”

Sebastian’s poignant literary critique to this statement arrived immediately: “Jesus, get over yourself”.

“I need to get over you fucking me over first. Sugar?”

“Over me? You still think it was my fault? Oh, no, thanks, bitter is fine.”

“Yeah, I don’t get the point.” Wallace sipped from his coffee. “It’s good if and because it is bitter. Why ruin it with the… homogeneous taste of sugar, and cover the coffee’s own personality? And look, this one” he said picking up the brick of ground coffee to examine the label “isn’t even that great of a coffee. And yes, it was your fault. Always.”

“My f…” Wallace pointed his robot index menacingly towards his brother, only to then retract it with apparently great difficulty, as the outrage was causing even the robotic appendage to shake. “Fuck you Seb. You didn’t even tell me you had a daughter at all. And you didn’t because you thought that all this time you’ve been the victim and the fault is mine?”

Mary felt like leaving a reassuring message in the chaos between one sip and another: “time to calm down, boys…”. Sophie, on the other hand, did not really like coffee, so the less unenjoyable thing she found to do was to just stare at the pitch black surface of the liquid make tiny waves with every shout.

“You piece of shite, this is how delusional you really are.” proceeded Wallace (but not without then stopping for another sip). “You are so wrong with this, so wrong, that in the time you were not talking to me because of your comically mistaken ethical assessment of both me, yourself, and perhaps the rest of the planet, you had the time to have and grow an entire adult daughter of… how old are you, love?”

Sophie shook her cup a bit in hope the muddy dark and now cold substance would magically turn into green tea. “I’m twenty.”

Sebastian’s attempt at a retort was tragically cut short as Wallace’s attention was redirected suddenly on the young girl. “How are you getting married at twenty?” he asked. Sophie wasn’t sure how to answer and just kind of stretched her eyes open.

Sophie wasn’t sure whether to defend her own choices because she wasn’t entirely sure if they were being criticised. Wallace sighed, then sat. “Why haven’t you visited in all this time?”

Sebastian remained silent. Wallace replied to that silence with a critical nod. “Well, this house has too many bedrooms for me at the present moment. Perhaps you three could spend the night.” The brothers looked into each other’s eyes. “Will you do me the honour?”